AC vs DC Which Is More Dangerous?

Many people argue over the intensity of AC and DC. Let us help you find out which of the two is more dangerous and why.

We will further discuss the reasons of electric shock, dangerous levels of ac and dc and their hazardous effect on our bodies.

The difference between AC and DC:​

AC, known as alternating current, is the current which reverses its direction over a time period.

Voltage is taken as a driving force for current. AC voltages also change their direction or 'polarity' after some time.

Alternating current flows in the form of a sinewave. The number of cycles completed in a second is known as 'frequency'.

Hence, a frequency of 50 Hz means that the current completes 50 cycles in one second.

DC or direct current is the current which does not reverse its direction and flows in a straight path while the polarity remains constant.

Since DC does not flow in sinusoids nor changes direction, it does not have a frequency. 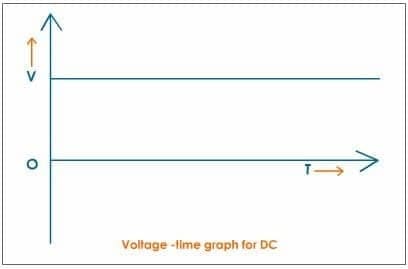 Hello there! On a related topic, we previously wrote a blog about Arc Rated Vs. Flame Resistant Clothing – Important Difference Need To Know. If this peaks your interest, check it out and let us know what you think

What causes an Electric Shock? Current or Voltage?

An electric shock is caused by a current, not voltage.

Current is the flow of charges that move from higher potential point to lower potential point. These charges flow through the body when a person comes into contact with an electrical energy source.

The voltage, however, is equally important as it determines the magnitude of the current.

This can be understood through ohms law which clearly states that voltage and current are directly proportional to each other,

Why does the human body feel an Electric Shock? ​

First of all, the human body has its own resistance to electric current which varies throughout the body. The skin having the most resistance of about 100,000 ohms while the internal body having at least 300-500 ohms.

The body feels an electric shock mainly due to the effect of heating and stimulation of nerves and muscles. The resistance of the body to the current causes energy to dissipate which results in a heating effect or even burns.

Once tissue breakdown of the skin occurs, the body provides a low resistance path to the current because our blood, muscles and organs contain many ions which help the current to pass.

This flow of charges inside the body is then accompanied by muscular contractions and ventricular fibrillation.

Sweaty or wet conditions cause the skin to significantly reduce resistance, resulting in increased intensity of electric shock as more current passes through it.

Some values of skin resistance can be seen from this table:

Human body fat has a high resistance. So, for two people having different body fats, the person with the higher percentage of body fat will experience a less severe shock as compared to the person with lower fat.

AC can cause stimulation of sweat glands and induce sweating thus lowering our body resistance which will consequently increase the shock current.

The time duration of electric shock is also important. The severity of the injuries increases with the duration of time. Even a small current of 0.4 mA can be painful if held on for too long. Fibrillation can occur within 0.2 seconds at 500 mA, while it can take 0.5 seconds at 75 mA.

As discussed above, AC voltage and current can be represented in the form of a sine wave. It can be observed that a sine wave has two peaks, a minimum peak and maximum peak.

The values of current voltage at these peaks are known as Peak values which are the highest values reached in the process. 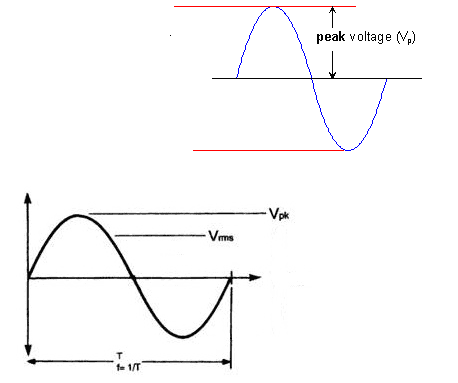 As for RMS values (root mean squared values), these are the values of AC current and voltage which produce the same level of heating effect as DC. RMS can be considered as an AC value's equivalent to DC and is given by: 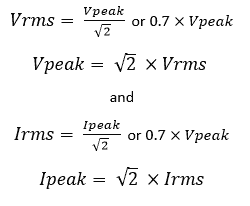 Since DC does not have a sinusoidal waveform, it will not have any RMS value, and only a constant peak value will be maintained.

Well, for 220 V being a RMS value for AC, its peak value will be 311 V, hence it will be having a higher value of current at some point.

One thing should be kept in mind that it's not the voltage but the current that causes an electric shock. Apart from voltage, current will also be dependent on the body resistance.

Therefore, the value of resistance matters more than the same levels of AC and DC power. The lower the resistance of the current path, the greater will be the electric shock.

The dangerous values and effects of AC and DC:

The dangerous values and effects of AC and DC:

We can observe from the above table that both AC and DC produce severe and life threatening results. However, we can also see that a larger magnitude of DC is required to cause the same effect as compared to AC.

The effect of frequency:

Let-go current is the highest value of current at which a person can let go off the conductor by using muscles, affected by the current. The frequency of the current is equally important in determining this value.

50 Hz AC is much more fatal then a 2000 or 4000 Hz or 5 Hz AC of the same magnitude. The reason being, at 50 and 60 Hz, the electrical pulses from the shock stimulate the body's muscles and interfere with our own nervous system.

For example, a 50 mA, 50 Hz AC is sufficient to cause ventricular fibrillation (the heart stops pumping and beats irregularly) while 150 mA of DC will be needed to produce the same effect. [1]

So basically, DC current is required more to cause the same effect as AC. 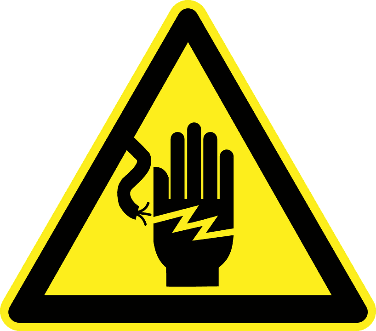 In conclusion, we would like to stress that AC and DC both are hazardous for us. Electricity should not be taken lightly.

However, the attributes of AC to induce muscular contractions, ventricular fibrillation and other severe damage at a much smaller magnitude than DC make it more lethal than DC.

We should avoid any bare contact with electricity and stop others from doing the same. It is vital to be aware of the risks of electric shock and the precautions needed to prevent such an incident from happening.

Before working on an electrical equipment, make sure to use a multi-meter to check the voltage and current levels beforehand. It is important to know the causes in order to be safe from electrical hazards. One of the causes include faulty and poorly maintained equipment.

It is also necessary to have relevant PPE's such as rubber boots and gloves.

Another hazard is an Arc Flash event in an electrical system. That is why electrical safety and prevention are crucial for any commercial or industrial facility.

We hope this article proves to be helpful for our readers. Please feel free to give your valuable suggestions in the comments below. Thank you.