Should You Open Energized Panel Covers?

The practice of removing energized switchboard and panelboard covers when performing annual/quarterly/monthly maintenance has become a common place. De-energization cannot be stressed enough before all types of maintenance work on electrical equipment can be initiated. This is rarely due to the fact that the personnel are inexperienced or non-qualified for the job, but instead it's usually because of following the traditional method without question.

The occupational safety and health administration talks about the importance of de-energization and the conditions under which energized work can be performed as follows:

"Live parts to which an employee may be exposed shall be deenergized before the employee works on or near them, unless the employer can demonstrate that deenergizing introduces additional or increased hazards or is infeasible due to equipment design or operational limitations. Live parts that operate at less than 50 volts to ground need not be deenergized if there will be no increased exposure to electrical burns or to explosion due to electric arcs".

It is clear from the above statement, that one must never work on live circuits unless absolutely necessary. Under the conditions of an absolute necessity to perform work under live conditions, OSHA has a requirement of a risk assessment which includes an Arc Flash Hazard Analysis for all electrical work at 50 volts or higher.

The NFPA 70E states that:

"Energized electrical conductors and circuit parts operating at voltages equal to or greater than 50 volts shall be put into an electrically safe work condition before an employee performs work if any of the following exist:

Hello there! On a related topic, we previously wrote a blog about Plugging Two Extension Cords Together is Dangerous! Here’s Why Can’t You Attach Two. If this peaks your interest, check it out and let us know what you think

There are certain exceptions defined for performing live work, taking off the protective covers of Panelboards for visual inspection which are as follows:

Even after considering the above exceptions, it is still generally not recommended to open energized panels through the removal of covers due to the risk involved. Personnel are faced with a certain inconvenience when required to open covers, which is why they prefer to open the panel covers under live conditions.

The following steps are necessary to ensure effective de-energization and isolation which in turn would provide increased electrical safety for the personnel:

4. Confirmatory Test:A final test including continuity check and grounding check is performed to ensure that the equipment has been completely de-energized. 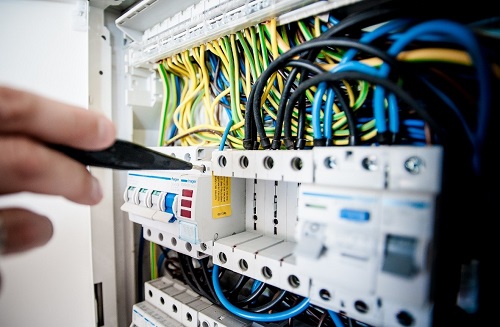 If we consider an example, where the facility owner who just had a critical process interrupted due to a voltage spike on one of the panels, may not be approving of the idea to have the process be interrupted again in order to connect the monitoring equipment on a de-energized circuit. Once again it can be emphasized that working on de-energized panel covers or circuits is the preferred procedure. However, it any not always be a reasonable choice, but that doesn't mean that safety can be compromised.

With so much at risk, the efforts required to de-energize the equipment before opening the covers should be given top priority. An effective way is to use Infra-red windows which can allow the thermography to be performed without removal of the covers, effectively preventing any arc flash hazard from occurring to the working personnel. Additionally, the equipment within the covers should be visually inspected to identify and eliminate the risks involved.

What are The 7 Important Steps to Perform An Arc Flash Study? - 2019 Important Guide!