In power systems, it is a common occurrence that there are unbalanced voltages and currents on the distribution side of the grid. But these voltages and currents might be unbalanced anywhere through the grid in the case of a Fault, most commonly a short circuit fault. The simplest method to calculate the before mentioned quantities is a method termed "symmetrical per phase" technique and the concept is known as Symmetrical Components given by Fortescue's Theorem. It is also known as the "Three-component method".It can be described as:

An unbalanced system of 'n' phasors can be resolved in an 'n' system of balanced phasors called the symmetrical components of the original system.

What are symmetrical components and Why do we use them?

Under the unbalanced condition, it is imperative to calculate the magnitude and phase angles of voltages and currents of each of the phases of the concerned section of the grid, as the protection system Relays use these values as the basic parameters for operation. But this can be quite a tedious and difficult task as the system is quite large and unbalanced values also tend to make the calculations complex.

Hello there! On a related topic, we previously wrote a blog about Fault Analysis in Power Systems. If this peaks your interest, check it out and let us know what you think 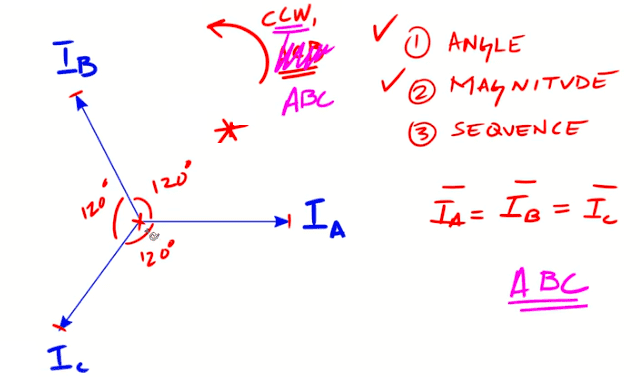 So, what is the balanced set of phasors? Well, its like a spinning wheel with three arrows. Let's name the three arrows A, B, and C. For 3-phase balanced set the angle between the phasors is of 120' and has the same magnitude. The three arrows (phases) are 120' apart. The wheel can rotate in two possible directions counter-clockwise and clockwise. Now depending on how the wheel rotates the arrows(Phases) will have the sequence of ABC or ACB. This is seen by considering a stationary point if the wheel rotates clockwise first A will pass the point then C and then B. And when the wheel rotates counterclockwise then A will come first then B and finally C. These are the angle, magnitude and phase sequence relation of Balanced set of Phasors.

There is a major difference in balanced and unbalanced phasors. The balanced or symmetrical set of phasors are those which have the same magnitude and are all 120' apart. Whereas the unbalanced or unsymmetrical set of phasors are those that have at least 1 phase having 1 magnitude not similar to the others or 1 phase being apart at an angle that is not 120'. 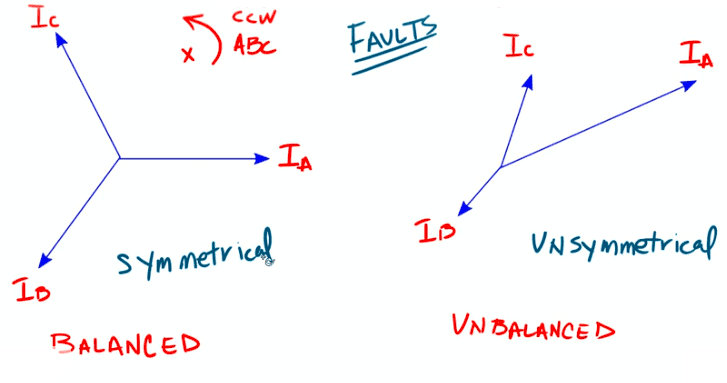 Breakdown of the Symmetrical Components:

As the name three-component method suggests that the symmetrical components comprise a set of components that are balanced in nature.

For a symmetrical system, the source(generator) currents are equal in magnitude and are in phase, with their three phases 120" apart. Also, the impedances of the three-phase circuits and equipment are of equal magnitude and phase angle.

For a the positive sequence the Three phasors are balanced. Meaning their magnitude is same and they are 120' apart. They have the same phase sequence as that of the original set of phasors. For this case it is Ia,Ib,Ic. They are as shown in figure below: 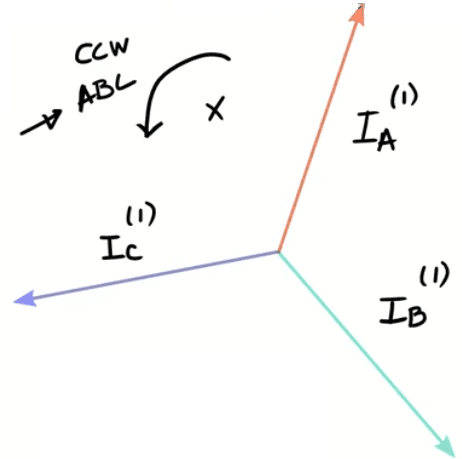 For a negative sequence the Three phasors are balanced. Meaning their magnitude is same and they are 120’ apart. They have the opposite phase sequence as that of the original set of phasors.For this case it is Ia,Ic,Ib. They are as shown in figure below: 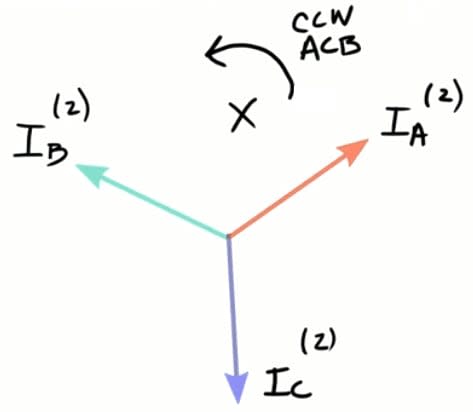 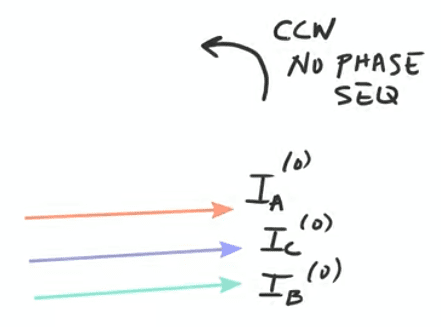 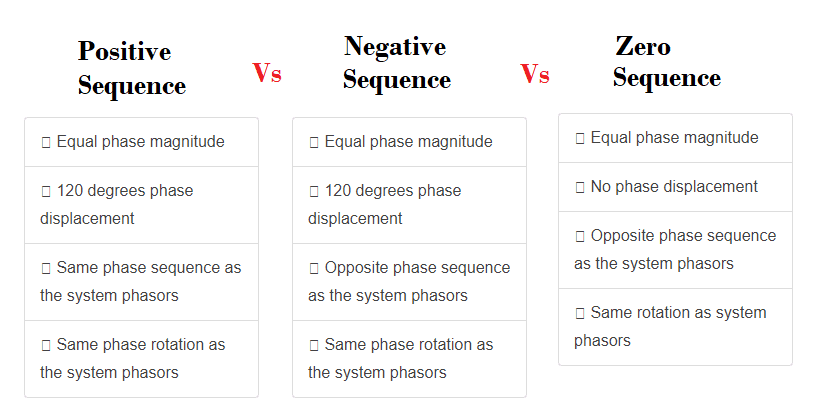 As we have seen that in symmetrical component theory the concept of 120º displacement is quite important therefore, we require some parameter or operator that might cause this 120' rotation. The operator 'a' is thus used. It is defined as under:

The unbalanced phase currents in a 3-phase system can be expressed in terms of symmetrical components as under:

The subscript 1 represents positive sequence component of each phase.(Ia1 for phase A)

The subscript 2 shows negative sequence component of each phase.(Ia2 for phase A)

In order to simplify our calculations, we will be using phasor A as our reference phasor.

We will now be using the 'a' operator to relate the positive sequence components of each phase.

We will now be using the 'a' operator to relate the negative sequence components of each phase.

It should be noted that zero sequence components for each phase remain the same.

A balanced set of zero sequence components is achieved here.

We can now substitute the symmetrical components of each phase with their equivalent to the reference phase A to get a set of equations completely in terms of phase A components.

Hence all our 3 phasors can be represented using symmetrical components of only phase 'A'.

We can also manipulate these equations to get a set of equations which will give us the symmetrical components of Phase ‘A’ , Ia1, Ia2, Ia0, in terms of the other phasers IA, IB, IC. 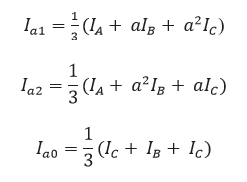 Hence with these equations, we can convert an unbalanced system into a balanced set of 3 systems.

Moreover, we can convert symmetrical components into their respective phasors and vice versa with these equations.

It is also important to note that the same equations apply for Voltages as well. We just replace 'I' with 'V'.

Where VA ,VB and VC are the phasor voltages, and Va1 , Va2, and Va0  are the positive, negative and zero sequence Voltages of Phase 'A'.

We can see those symmetrical components are a way of analyzing unbalanced phasors which arise due to faults. Converting a set of unbalanced phasors into sets of balanced components greatly simplifies our analysis and is helpful in performing fault calculations, power flow studies, and stability studies.

Along with phasor values of current and voltage, the zero-sequence and negative sequence components are also an important input to protective relays that sense these values to decide the nature and type of the fault.

For example, a zero-sequence component indicates a ground fault, while unbalanced loading leads to negative components, hence sensing these components is essential in order to efficiently protect our power system.

Moreover, we can calculate sequence impedances using symmetrical components, from which we can derive sequence circuits of transmission lines and transformers and ultimately sequence networks of a complete power system. This helps us analyze the behavior of our power system under different types of faults.